Fighting poverty and global warming are key challenges for mankind. „This year we are laying the groundwork for success in 2015 on three fronts: achieving the Millennium Development Goals, adopting a meaningful new climate agreement, and establishing a new vision for a sustainable future“, UN Secretary-General Ban Ki-moon says in the 2014 edition of the Global Compact International Yearbook. Edited by macondo publishing the new yearbook offers insights to political as well as sustainability issues. 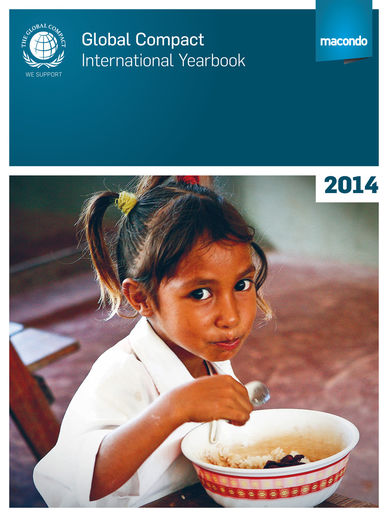 This years´ focus lies on the Post-2015 Agenda. We discuss the transition from Millennium Development Goals to Sustainable Development Goals. Question are among others: Are the concepts compatible? How does the architecture of a sustainable future look like? And above all: What role does corporate responsibility play in this context?

The second key aspect in our Post-2105 discussion is about measuring the SDGs. In the past indicators have been developed and used in reporting progress toward the MDGs, and now the approach to upcoming SDGs must be systematically developed. This section also includes lessons from innovation management and "big data".

Climate change is another focus of teh yearbook. It counts on very prominent authors like Christiana Figueres, Executive Secretary of the UN Framework Convention on Climate Change (UNFCCC), and Sigmar Gabriel, Vice-Chancellor of the German government and Federal Minister for Economic Affairs and Energy.

Traceability: How certification brings positive impacts and better traceability to business. Elaborated NGO inputs by Karin Kreider, the Executive Director of the ISEAL Alliance and one of the world’s leading experts on credible certification and eco-labeling, as well as Markus Arbenz, Executive Director of the International Federation of Organic Agriculture Movements (IFOAM) and Caroline Hickson, Director of Brand, Communications and Strategic Partnerships at Fairtrade International.

Mandatory CSR: When CSR discussions started in the late 1960s, early 1970s ethical and moral arguments were the drivers. Since then CSR activities have become more holistic and professional. This becomes a principle-based approach in which business seeks to identify smarter business models, products, and services. Elmer Lenzen illuminates the boder zone between voluntary and mandatory CSR.